On June 1st at 6:00 p.m. I left my home city of Tulsa, Oklahoma on a Greyhound bus to head out to the 2015 Fuller Center Bike Adventure, which started out in Oceanside, California. I arrived in Oceanside at June 3rd at 7:30 a.m., which got me in the area before Lydia Huelskamp the trip leader even arrived. I took the local busses to Carlsbad, CA and ended up walking two miles to get to the Faith Community Center, the church where we were all supposed to meet up for the ride. The youth pastor greeted me and let me watch a Dave Ramsey movie about how Christians can manage their finances. I had lunch at Pieology, which was awesome. Lydia and the group that came in the van with her arrived at 5:30 p.m.

Lydia and the team all met up in Americus, GA and drove to Carlsbad. It was nice to get to know the people assisting with the ride as well as a few whole way riders. We spent the next two days at the church waiting for the rest of the riders to come in. This was my second year with the Fuller Center ride, so it was nice to see familiar faces like Tom Weber and Lauryn Kostopolous. When everyone riding the first segment came in, we played a name game called Trainwreck (just like last summer) to get to know each other. I was probably too excited for the ride to start and didn’t sleep very well the night before. On June 6th we got up at 6 a.m. and got ready for the ride. The pastor did a devotional and Ryan Iafigliola and Lydia went over the safety rules and we left Carlsbad for the Oceanside pier at 9 a.m. When we arrived at the beach we all took pictures of us dipping our tire in the Pacific Ocean and Ryan got us all in a circle to tell us the story of the relationship with Christ being like a tandem bicycle. We rode to Temecula, CA which was a 48 mile ride with 3,400 ft of climbing. 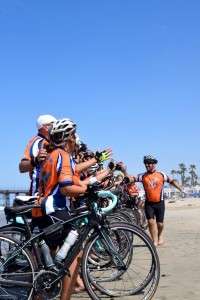 I was very exhausted but exciting to get the first day of the trip done. We stayed at Temecula United Methodist Church and the next day on Sunday morning we went to the church’s service. Afterwards Carolyn McDonough, Jon Falk, Kelsey Correa, Will Peterson and myself went to walk from the church to a district of Temecula called Old Town. We were surprised to learn that the walk was over 3 miles. When we arrived in the area we went to a couple of antique stores and had a late lunch at a Mexican restaurant. We were later picked up and driven back to the church where we had a dinner of leftovers the church donated to us the previous evening. Ryan then told us a short life story of Fuller Center founder Millard Fuller showed us a new video describing the Fuller Center. It was a very nice day and I’m looking forward to tomorrow’s ride, which is even more challenging.