It was my first “official” century of the year, and by far one of the best days of the East Coast. In the morning, we passed out of Delaware and paused to celebrate at the state line sign. The first few hours and scenery flew by, accompanied by the hum of the bike and sounds of nature surrounding us. Before I knew it, I was in Baltimore and only 40 miles away from the church.

However, after the second rest stop, I felt like I had been drained of all my energy. I kept going anyway and pedaled, pedaled, pedaled. Time seemed to slow, stretching on interminably. But something kept me going. It wasn’t caffeine, or food, or the thought of a warm shower, or even the responsibility to ride the miles I fundraised for. While the muscles scream and lungs burn, conversation distracts. When the will is depleted, a glance at a fellow companion spurs you on. Experiencing the ride with other people who have remarks or funny things to say makes it more interesting. Alone, things can get boring, but to have someone to share that time with motivates you to keep going because you don’t want to leave them. When they slow down for you, or wait for you at the top of the hill, it makes you feel like they care about you—because they do. God made us to be together with people, because we work better together, and that’s especially clear in times like these. 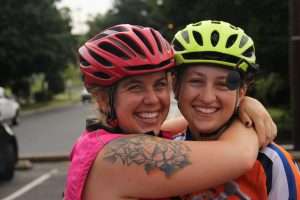 Initially, I had a rough time transitioning from the ride on the West Coast to the East Coast. I was missing some of the people that were on the West Coast, especially those I rode with a majority of the time. I didn’t feel like I fit into the East Coast group, because of the different riding paces and styles presented. It was hard for me to accept the change and embrace it when I just wanted things to be the same as they were before. Even though I’m sure I wasn’t a joy to be around when I was struggling through the changes and trying to find my place, everyone on the team found ways to encourage me, lift my spirits and show me that I do belong here. I realize that even though the East Coast is different, it is just as wonderful in its own way. The people and the camaraderie of the FCBA groups I’ve been on has always been fantastic. It’s what keeps me pedaling, and coming back for more.