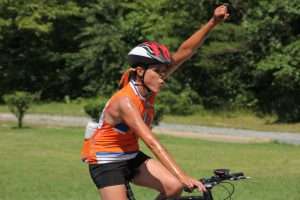 There’s a certain hubris of youth that causes you to continuously convince yourself that your body is invisible. It can challenge you to swear off the comforts that others swear by just to prove that you can take it and that your body is stronger than the elements.

Combined with a NYC bred thriftiness, the result has been an attempt on my part to ride the entire two weeks of my segment in running shorts instead of biking shorts. I’m sure I’ve come up with worse ideas over the years, but this was definitely up there. I was able to make it through New England and a good portion of the mid-Atlantic without too much trouble; unfortunately, back to back century and near century rides around the Mason-Dixon corridor were apparently my breaking point… or at least my back side’s. From now on I’ll be rocking the butt padding! 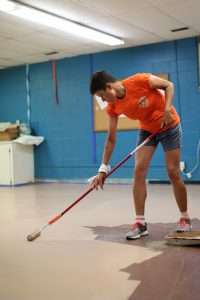 In the meantime, saddle sores got the better of me today and I had to take my first sag day. To make the most of it I got out of the van 10 miles early and jogged the remaining distance to the church. On the way I was greeted with winding back roads, quaint farms, and dense, forested stretches of moderate temperatures and complimentary cloud clover to finally give my toasted skin a bit of rest. Since the mileage was light enough to allow everyone to return to the church early, we took a group trip to the St. James River and spent the remainder of the afternoon wading in the water. While I woke up tired and stressed by physical pain, it turned out to be a near perfect day. 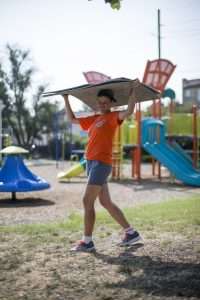 This day also gave me more experience with what I like to call the ‘real Virginia’ which is to say any area in Virginia that falls outside the suburbs of D.C. Between the narrow roads, fast moving traffic and occasional tractor trailers greeting me with a blast of headwinds yesterday, I was more intimidated than enamored by my first taste of the state that’s made for lovers. After today my guard is coming down. Beautiful, slow moving rivers; old, rustic red brick churches; and stores with names like ‘aw shucks’, will do that to you. (Tonight’s peach cobbler didn’t hurt the mission).