“O beautiful for spacious skies,
For amber waves of grain,
For purple mountain majesties
Above the fruited plain!
America! America!
God shed his grace on thee
And crown thy good with brotherhood
From sea to shining sea!”
-America the Beautiful

This song so aptly describes what we’ve been through these last two weeks. And then today we started our journey on the Bonneville Salt Flats, which was a total change in landscape along with gusty winds. We made the ride because we worked as team. As soon as Macy and I started out we were drafting, though I was never the first person and that was the reason I could stay in there riding. The six or seven riders that went on made it through because they continued working together. 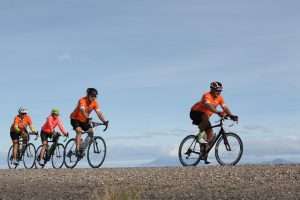 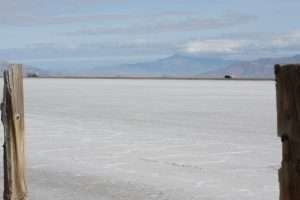 I bailed out at the first rest stop. Karen and I continued together from the third rest stop and ended up going 62 of the 95 miles. It was sort of fun just the two of us out there riding. After the third rest stop the scenery did change to the “purple mountain majesties,” rather than just all salt flats. Coming into the church our host had snacks and drinks ready, and was continually asking if we needed anything.

We have been together for two weeks now and we have become a village, getting used to our chore assignments and starting to gel with the daily routine. I just feel privileged to be a part of the Fuller Center for Housing and the support that I’ve received from everybody. It’s just such a rich feeling.