Whew, what a day!

Eight weeks ago I was with this incredible team of volunteers when they pushed off the coast in San Francisco. The routine was new. The miles felt long. The other riders felt like little more than strangers. Only able to join for a week, I left in Nevada.

Now, here we are seven weeks later, and I’m back joining them for a day. Now they’re a team! They’re strong! Now I’m the one huffing and puffing to keep moving along. The rain we got this morning hardly even fazed them. They’ve got the routine down pat, and they know each other all too well. That’s exactly how we like it, and it’s awesome to see.

But today was a break in that routine, because today is the day they hit Americus! The epicenter of the Fuller Center. The place where it all started; the place the Fuller Center and the leaders of the Bike Adventure call home. 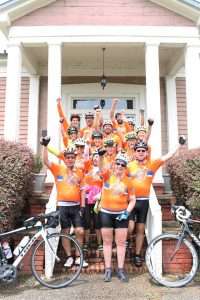 A grand entrance it was. With the help of a police escort, God stopped the rain as we rode the final mile over Millard Fuller Boulevard to Martin Luther King Jr. Boulevard and into the enthusiastic welcome of dozens of cheering friends at the Fuller Center’s humble International Headquarters. In most of the towns they visit the riders are mere guests or tourists; here, they’re long-awaited celebrities.

What struck me the most when talking with the riders today was how much they have come to like each other. Even after eight weeks, they just like being around each other. One rider left for a day and a half to stop at his home nearby, and despite having all the comforts of home, he said something was missing! He told me he just missed being around these people! What a great group.

We’re just getting started here in Americus. The group will be here for three more days, each packed with exciting and meaningful events. A glimpse at what’s on the agenda:
– Attending Sunday school at the class of President Jimmy Carter
– Eating dinner at the home of our co-founder Linda Fuller
– Meeting the Fuller Center’s president David Snell

– Visiting Koinonia Farm, our spiritual birthplace
– Working on a home of a family here in Americus, and taking another day to lend a hand in nearby Albany, Georgia, which was devastated by tornadoes earlier this year.
– More church potlucks and church meals

A special thanks to First Presbyterian for hosting us, to Americus Mennonite Fellowship for making dinner happen tonight and especially Nash and Cecilia for making probably 100 tamales, and to Mayor Barry Blount for coming out to welcome us to town.

On a final note, it truly is amazing what these riders have done, especially our trip leader Henry. His is the only position on the ride where riding the miles becomes the “easy” part. My deep admiration and appreciation to him and all the riders for all that they’ve done, and still being able to smile. May God bless them for being a blessing and continue to give them safe travels.