Mike and I were sweeps today. Within a block or two of leaving the church, we ran into Henry whose chain had broken. He had already called Grace to bring the trailer back because there was an extra chain in it. In the meantime, Mike (the mechanic) had the necessary tool with him. Grace hadn’t gotten very far down the road either, so the trailer arrived quickly. Unfortunately, the chain in the trailer was the incorrect type. Fortunately, Mike had one in his bag in the trailer that would do. So, if Mike hadn’t been the mechanic, and Grace hadn’t been close enough to swing back, Henry would have had neither the correct part or the expertise to fix it. I call those coincidences God winks.

This delayed us a bit getting to Davis to the highlight of the day—the Bicycle Hall of Fame. It is normally closed on Tuesday but they kindly agreed to open for us. When we arrived, most of the team had already gone way ahead of us, so we thought we’d miss out. However, the proprietor saw us outside in our orange jerseys and invited us in. What a fun place! It would be nice to have this bike for our climb tomorrow! 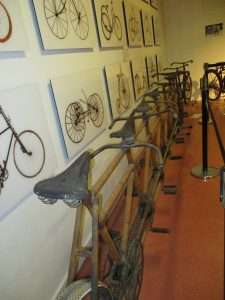 Back on the road, or path, again the journey from Davis to Sacramento was awesome. We saw beautiful egrets and herons along the Prospect Slough. Allowing this natural area to be left to the birds while I-80 thunders overhead is brilliant. The trail could use some maintenance, but it’s a great connection between the cities. 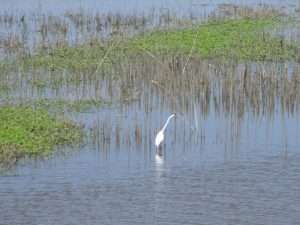 In Sacramento we got on the New American River Trail where we thoroughly enjoyed our ride. It winds along the flood plain of the river that goes through Sacramento, with just enough shade and woundrous views of amazing birds. Most birds I do not know the names of, but I recognized a couple of mockingbirds chasing off a crow!

One of the many things that impresses me about the Fuller Center Bike Adventure is how they have entrusted these young men with amazing responsibility. Every time Ryan speaks about the mission, his compassion for those who need homes is so clear. Henry has planned this adventure and continues to tweak the plan constantly as situations arise that were not in the plan. For example, tomorrow we were supposed to ride to Pollock Pines however, the snow in the Sierras means the pass we were going to ride is still closed! So he has had to adjust—and rolling with the punches is apparently his thing. He does it well.  It was a pleasure to ride with these two for a while today. 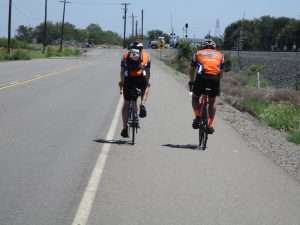 Tomorrow will be the first big opportunity to climb. We’re headed for Pioneer, 70 miles and 4,000 feet elevation from here. May God grant us tailwinds, strength, endurance, and joy.