Originally, I joined the Fuller Center Bicycle Adventure last year simply so I could go on a supported ride that included some mountains, some areas I hadn’t ridden yet. 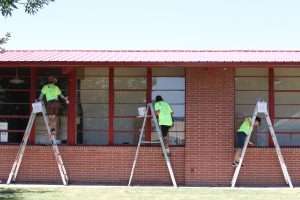 Then I got into the group working/living/traveling groove and it became more than just riding. Don’t get me wrong—I do love to ride. But on the FCBA there is the added interest of meeting enthusiastic people with similar goals and making progress by repairing or building  homes along the way.

Since my husband, my father-in-law and I built our house and 2 barns about 25 years ago, I have not built much. I learned all I know about building and repair from Ron and Ken. It’s been nice to be able to use the skills again, starting last summer on the FCBA ride and again this year. I’m only riding three weeks this year, but I hope we have another build day before we leave.

I’m glad I can help out people who need it by using my skills of riding and building. I’m glad I fortuitously met Connor Ciment while out riding in Georgia, since he first encouraged me to meet former FCBA rider Mary Lacksen, and then to become an FCBA rider. I’ve met so many excellent people since that fateful day in Americus.