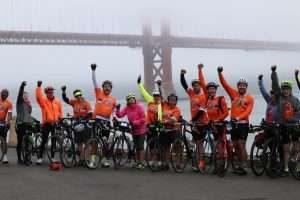 The swirl of activity and apprehension matched the morning fog in San Francisco. The night before 24 people, most strangers, were given a brief tutorial of the logistics for the Fuller Center Bike Adventure.

But how do you imagine something you have never seen? And even if you have seen it, you don’t exactly what it will look like this time. So much newness and excitement mixed with longstanding dreams and goals was the perfect recipe for a brief glimpse of the adventures, joys and challenges to come, even if the details were still hazy.

Thankfully, as fog often does, it began to slowly fade, thus making the beautiful scenery more and more visible. The same is true of the metaphorical fog. As the miles gradually pass, what the Fuller Center Bike Adventure is all about and how exactly it works will become a good bit clearer.

By the end of the day, the skies and air were clear. The team is beginning to take shape.