All I accomplished today was going out and fighting the hills and the weather. 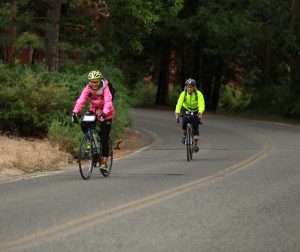 The riders were excited for the ride to start. About half decided to get a ride to rest stop two. Meredith and I volunteered to be the sweeps for the day. I volunteered because of the mountain climbing required; I knew I would be slow and at the back of the pack. At the start of the ride I noted my back tire was somewhat flat, and I had to climb back up the steep hill of the church even before we started to ride.

The climbs were slow, but I remembered Mark’s G2G mantra, Go to Granny, and that had nothing to do with Judy and I, rather the lowest gears for climbing. The climbs were steep but doable at a slow pace. Meredith was very patient with how slow I was going.

Before we reached rest stop one, we noticed that my back tire was going flat again. We came up to a little cafe and went inside to see if anyone would help us change the tire. A bunch of men were eating and when we asked if anyone knew how to change a bicycle tire they all looked at us like we were crazy. They did not say anything, they just stared at us. We went back outside and decided to use a CO2 cartridge to inflate the tube, hoping it would last until we reached the rest stop. Since neither of us had experience with these cartridges, we began reading the instructions and making it more complicated than it really was. One of the men came out and attempted to help, but by this time we had figured it out and inflated the tube and were off on the road. Along the way one of the cafe men passed and honked with a wave. Why could they not have talked to us in the cafe? 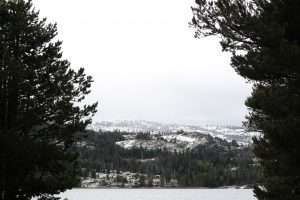 The wind, the sleet, the rain and the snow put a damper on today’s ride. I was so cold. My face and hands began to hurt and then became numb. The only good thing about the ride was the fantastic scenery. There were ski slopes, deep snow on the ground and some of the snow covered hills looked as if they were part of a glacier.

By the time we reached 8,000 feet the weather turned colder and worse. I was miserable and I felt like it was too dangerous to continue riding. Turning onto Kay’s Street, to the second rest stop, we started going down a steep hill and a lousy, bumpy road. I was not a happy camper because I thought if something changed and I decided to continue riding I would have to climb that hill. We arrived at the bottom of the hill and the rest stop support team was freezing, we were freezing and I decided to mount my bike onto the Busby van and climb in to warm up, along with everyone else.

At rest stop two, we had a rider meeting in the Busby van with the heater on. We were packed like sardines in that van eating crackers and Goldfish. Our bodies started thawing and we were thankful after being so uncomfortable. We were in a location where we had no cell service, so we were waiting on the FCBA van to come back. Phil showed up and we decided to pack the rest stop food into Phil’s car along with the table. We took the wheels off Meredith’s bike and put the wheels and frame between all the people sitting on the floor in the Busby van and headed to rest stop three. Two grannies got to sit on the seat with Wes in between and Cheryl and Becky on top and Maddie, Kian, and Meredith on the floor. We passed Monica pedaling away toward rest stop three. At rest stop three we waited for Monica and the FCBA van to pick up the riders and support team.  Our hero rider, Monica, rolled into the rest stop and decided to call it a day.

Finally we arrived at the church where we congratulated Ryan, Henry, Mike, Steve and Mark for riding the whole route today in such bad weather. Then everyone quickly gathered their stuff and took off to the showers at the recreation center two blocks away. Some riders went out to eat and the rest of us ate leftovers. Time for relaxing now.