Our first day was, by Fuller Center standards, a relatively short ride, only 40 miles.  There was an extended climb leaving Seattle, but that only served to get the blood flowing. Once we got that out of the way, it was pretty flat….until we got to St. Leo’s Church in Tacoma. 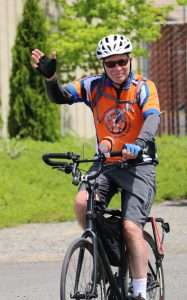 The congregation that built St. Leo’s in the early 20th century clearly wanted the church to be as close as possible to God, way up on a hill. Good for the congregation, bad for bikers. But after we cleared that very steep climb, we arrived at the church that is truly living the mission of Christ. It has a century long commitment to serving the poor of Tacoma. Jeff Bemis, head of Business and Facilities, was our gracious host. He described his reaction to the request from the Fuller Center as cautious, at first. He clearly has his hands full with his current responsibilities. St. Leo’s houses feed dozens of people every night, as well as a vast number of other missions. Accommodating 30 bikers on top of everything else he had to do, was daunting. However, once he heard about the Fuller Center and what the ride was about, he reali zed it was totally consistent with the mission of St. Leo’s.

We stayed in a relatively new building named after Fr. Bill Bichsel, SJ. “Bix,” as he was known locally, died three years ago. He was local legend for his decades of dedicated peace advocacy and passionate service to the poor of Tacoma. He was tireless in living out his faith. At the entrance of the building there is a shrine to his memory that includes his iconic cap, sandals and his bible. It was a suitable place to spend the night. I think he would have approved. 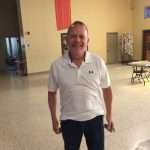 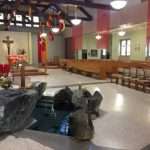 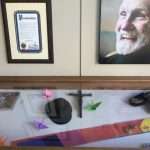 Tuesday, it’s off to Chehalis, Washington, a mere 60 miles away. Oyee’!