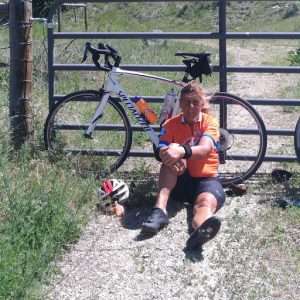 Leaving Superior was tough for me.  I remember the community at the United Methodist Church there well.   In 2016, I spoke with the church to see if they would host us. They were more than pleased to and were happy to share there gift of cooking….a sausage, carrot, potato dish cooked in a milk jug.  It was amazing.  Then, pancakes in the morning.    I really felt as if I was home!

First, I must mention that yesterday I woke up in a very bad mood (things going on at home).  God works in mysterious ways.  Not only did he plan to have a deer waiting in the middle of the road (yes, it did finally run off) and two mules which ran up to be pet (and did I ever pet them), but also that Jonathan rode with me to the first rest stop.  He was so delighted to be in front and even more excited to ride in first.  His joy was contagious and helped me to be in the moment and forget about all that was happening at home.

Today, there were several times when tears welled up in my eyes.  I felt horrible that Tim discovered that one of his spokes was broken.  He is the kindest of gentleman and has put his heart into this trip, both the physical challenge and the sharing of his sweat equity to help eliminate poverty housing.  Every pedal is an effort to help others.  With a broken spoke, he was unable to.  However, God blesses us with gifts that present themselves in the strangest of places.  Bill and Tim changed the spoke as a team.  As each and every spoke on the wheel is vital to make it roll, so is every person on this adventure.  Bill used his expertise in removing disc brakes and cassettes, while Tim changed a spoke for the first time.  With no experience, the two changed Tim’s spoke as if this was an ordinary task.  Phenomenal teamwork.  When I heard he was on the road, yes, those tears started coming!  In the meantime, the sweeps stayed behind, watching and waiting to start the ride.  Way to go.  Tears welling in my eyes again!

The ride was incredible.  I mostly rode alone because I knew I wanted to take several photos.   Meadows of yellow flowers, tracks, a river and snow capped mountains.  Yes, there is nothing like Montana.  We had to detour because of a mudslide (but some of the riders chose the original route).  Jeff did a remarkable job chalking the change.   Jeff is one of the most gifted cyclist I have ever seen…he is ever so humble and is always in front, but never misses chalking.

Every single cyclist on this team plays such a huge part on this adventure.  During Jeff’s devotion this morning, he stated that when people spend so much time together, conflicts occur.  But, in this group, I see nothing but encouragement, compassion, passion for helping others, kindness and love.  Thank you all for crossing that threshold, stepping (or shall I say cycling) into the unfamiliar in order to lend a helping hand to those in need.  You are all a special people.