For the past couple days, we’ve been used to rolling country roads flanked by corn and soybeans and interrupted by few vehicles. While riding on roads that allow for idle chatting is a nice break from narrow shoulders and busy traffic, watching field after field go by can become a little boring. Today, we shook up the scenery as we rolled nearer and nearer to Indianapolis. Houses started to appear instead of just barns, and more interesting sights revealed themselves. 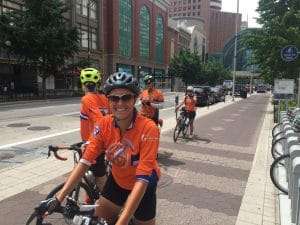 Some of us enjoy stopping at fun finds along the way. Today, this included a house that had about seven windmills in the front yard and a sign that said, “Windmill Ranch.” The 95-year-old homeowner came out to talk to us and told is that he’d built the windmills himself!

Then, we wound our way through Indianapolis via bike trail and observed the sights and sounds of the city. We saw people strolling down the sidewalks, colorful sculptures, and a canal that runs through the city. Tomorrow, we’ll have a build day in Indianapolis!