We covered a little more than seventy miles today, but there was one three-fourths mile stretch that made the whole day. We arrived in Vernal, UT just in time to join in their Fourth of July parade. While we were expecting maybe a few hundred people, there were more than sixty groups participating, and at least a few thousand spectators. We all had a ball riding along and talking with folks along the way.

Speaking of along the way, riding your bike along the side of the road means that you get to see things that you would ordinarily miss when travelling by car, and I’m not just talking about the scenery. If I could have a dime for every bolt, wheel weight, and broken bungee cord I’ve dodged in the last few weeks, I’d be a wealthy man.

The ride today was no exception, other than it was good to be back on the bike all day. I’ve been fighting nagging back pain for the last week or two; so, I wasn’t able to complete yesterday’s ride. The other riders have been unbelievably supportive, constantly checking to see how I’m feeling, and encouraging me. It seems that the stuff on the side of the road isn’t the only thing that’s consistent. Being with good people means that you get consistent support and encouragement, and this group of riders defines “good people.” 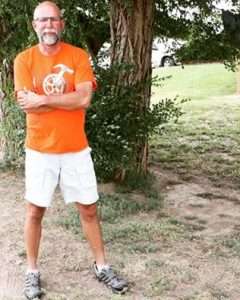