It was roughly a year and a half ago when I stumbled upon the Fuller Center online and decided to apply for their media internship. At the same time, I happened to be studying abroad in Quito, Ecuador, and volunteering at a non-profit called Extreme Response. Extreme Response worked in many capacities throughout the city of Quito, but I was placed at a city dump, caring for children during the day while their parents worked the only job they could get: sorting the city trash.

The dump has its fair share of political issues. The municipality of Zambiza had handed autonomy over to a board of directors within the dump, leaving the city government out of it completely. This system had worked wonderfully until the elected leader turned corrupt, holding more money for himself and his family, and leaving other families without pay and starving.

Due to this strife, Extreme Response began organizing food baskets for the families that were not receiving their only meager income. As we worked our way from home to home delivering these baskets, we arrived at one home that was far worse than the others. The walls were lopsided tin sheets, the door a plywood slab, and the floor was simply dirt. It was one room with one dirty mattress for the family of five, four of which were under ten years old. As we walked into the home to deliver the food, another volunteer instinctively reached for the light switch as one of the children looked at us and sadly said: “No hay luz.” Translation: There is no light.

In that room as we prayed over the food that would sustain the family for the next few weeks, I allowed myself to cry. There may have been a literal lack of light in the home, but there was also an incredible lack of light in the lives of the family. It was at this moment, as I stood crying hand in hand with the children, that I recognized the need the world had for organizations such as the Fuller Center. I knew very little of the organization at the time, but my work with them over the last year has only confirmed that we are not only providing safe places to live for families such as this one, but that we are providing light and all that comes with it: faith, hope, and love.

I have loved every second I have spent with the Fuller Center since last summer, and I often think of this family as I work everyday for people just like them. They are the reason that the Fuller Center presses onward, delivering light anywhere and everywhere we can. 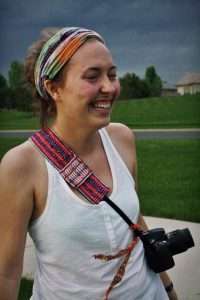