Four years ago, right after graduating college and getting my first teaching job, I was looking for a meaningful way to spend my summer break.  Previously, I had spent my summers working with an organization called Young Life.  I’d been an administrator at several of their camps, headed up dishwashing crews, and mentored the teenage camp staff.  But the best jobs I had were the two summers I spent leading mountain bike tours for them in Virginia and northern Michigan.

So I started looking for ways to spend my summer biking, and discovered the Fuller Center Bike Adventure.

The Bike Adventure, for me, started off as a way for me to spend a summer riding my bike.  I wanted to be able to say that I had ridden the entire west coast in a month.  But it wasn’t until I started doing more research about the organization that I discovered the amazing mission of the Fuller Center.

After seeing, firsthand, the incredible work the Fuller Center does, I knew it was an organization I would support for the rest of my life.  After getting married last summer, my wife Steffani and I started talking about ways to dedicate our lives to service.  We both love cycling, so I suggested we do a coast-to-coast ride this summer.  Eventually, Steff agreed.

It’s been a whole different kind of adventure, doing this trip with a spouse.  We’ve been frustrated with each other and even had a few disagreements (some more strongly worded than others), but those are far outnumbered by the laughs, smiles, and incredible memories we’ve made together.  The quote that comes to mind the most, when I think about this trip together, is some advice given by Theodore Roosevelt:

I love that fact that I get to enjoy this time with my wife and that, together, we get to do something worthwhile to serve other people.  I can’t ask for a better companion to do that alongside.

Steff and I have a tradition, when climbing a mountain, that whoever is ahead waits a few hundred yards from the top for the other to catch up.  “We summit mountains as a family.” I’m excited I get to climb the mountains of this trip, and the mountains in my life, together with Steffani.  I’m grateful to the Fuller Center for serving people in such a unique way, and I’m grateful I’ve gotten to use this summer to grow closer to my wife and all of my fellow riders on the trip. 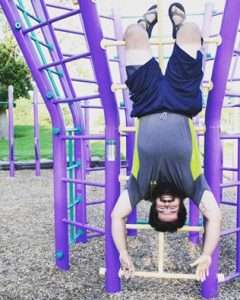