Last night after supper, after our 91 mile bike ride, some of us on the Fuller Bike Adventure ride went to Elvis Presley’s birth home in Tupelo, Mississippi. Elvis was born in 1936, in the midst of the Great Depression. His father, who moved from one odd job to the next, went to jail when Elvis was three for bouncing checks. His mother lost the house that Vernon, his father, had built. Seeing Elvis’ home was a reminder of why we are supporting the Fuller Center for Housing – to provide housing for those in need – whether for a family facing hard times or for a single mother who’s trying t  o make a home for her family or for an elderly or disabled person, who needs help with repairs. When people have a roof over their heads, they can concentrate on fulfilling their potential and fostering their children’s development. 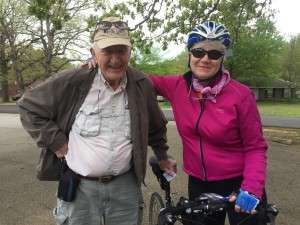 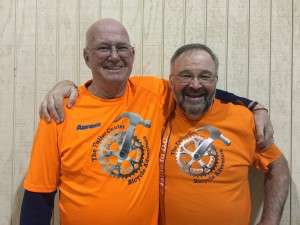 Family is an important part of our bike ride. For a short week, the Fuller Center volunteers become a family away from home, but some people bring their families with them. This year, Jenny and her 88 year old father will be biking together, as are the mother-daughter pair, Diane and Nicole, who will be heading west for a new job in Oregon soon after the ride. Mike, a three year veteran of the ride, brought his mother along to drive, cook, and support the team. John and one of the other Mikes are brothers and biking partners for the second time on the Spring ride. 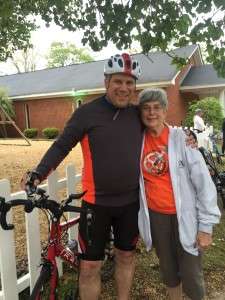 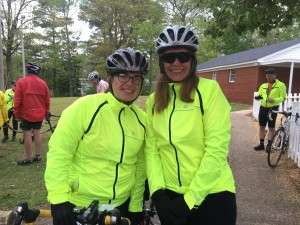 Our family of volunteers began the day by preparing a delicious breakfast at the campground in Tupelo and we ended the ride at Pearson’s Rexall on the square in Houston, Mississippi. For the last five days, I haven’t had to pull out my credit card or buy anything, fulfilling Millard Fuller’s dictum from Mahatma Gandhi, “Live simply, so others may simply live.” I looked forward to buying a long-awaited ice cream shake, but another family with a new baby, grateful for the help they received last year on the ride, generously bought ice cream for the entire team. While we were there the Mayor, Stacey Parker, stopped by to welcome us to Houston. I am thankful for all the wonderful hospitality and gifts I have received this week and I look forward to paying it forward tomorrow as we begin our build day in the Greenwood, Mississippi community. 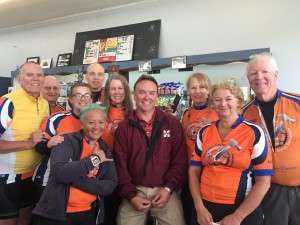