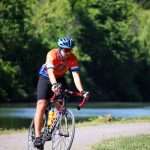 Since I had never visited upstate New York and New England before, I didn’t really know what to expect. I knew that it would be very scenic with the Adirondacks, the Green Mountains in Vermont, and the White Mountains in New Hampshire.

As a symbol of the whole trip, I was pleasantly surprised at the natural beauty of the nature we rode by. The rolling hills mixed with the steep climbs and descents have reflected a wonderful and breathtaking scene.

I have appreciated the opportunities in exploring the areas we have stayed when there is time to. Since our build day didn’t work out at Lake Placid, we had an unexpected and extra free day to explore what the town had to offer. A group and I visited the training center for Olympic ski jumps, the hockey arena where the United States defeated the Soviet Union in 1980 (dubbed the “Miracle on Ice”) and as a very special treat, an Ironman triathlon was setting up with 2,600 participants. Carrie and I had the opportunity to meet and chat with one of the athletes, bid number 973, where it was his 22nd Ironman race.

Another element I have thoroughly enjoyed during this adventure has not only been getting to know my fellow riders (where I assume the role as the grandson and in return I receive the advice, hardy laughter, and camaraderie of many grandparents) but also with meeting the selfless individuals who are generous enough to feed and house us for the night.

When we were in Littleton, New Hampshire, we walked down a very steep hill to the church where we were having dinner. The entire room was set up with laid out plates, silverware, salads with dressing, garlic bread, and the spaghetti with meatballs was personally served to us. The woman who organized the event was unbelievably hospitable, approachable, and welcomed us in like we were family. There were about 4-5 others who assisted in the dinner, and our group made sure that each table had at least one open seat to include the cooks for appreciation and to spark intriguing conversations. This element has made the trip that much more dynamic and interesting, as one could associate a town with a real human being.

As the trip is winding down, I have come to realize that appreciation, thankfulness, and humility are virtues that I would like to pursue more in my life, as I have seen so much of during this trip.

See this rider's progress, or donate towards their goal