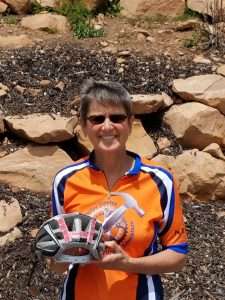 Ann Coleman is a second-year rider with the Fuller Center Bike Adventure in 2017. In addition to nearly quadrupling her personal fundraising minimum, she has offered invaluable encouragement for other riders as they strive to meet their goals. Ann resides in Park City, UT with her husband, Sandy, and a big black poodle.

You have been riding bikes and fundraising long before the Bike Adventure. How did you get started cycling for good causes?

My husband and I have always tried to support people doing something to help others so when we get requests from people asking for support for rides, walks, etc we normally donate. I have several good friends who ride their bikes in the MS150 so for years we have financially supported them. Five years ago one of them encouraged me to do the ride.  I had never been on my bike more than 25 miles at a time so it was a big step for me, but I decided to do it.  I got involved and had success in the fund raising.  Last summer Fuller rider Jackie Rouse and her husband Kurt who I work with donated to my MS ride.  I had only briefly met Jackie once, but after hearing she was doing the Fuller cross country ride I checked it out and donated to her ride.  She was in touch and invited me to join as they were riding through my area.  So I did a segment from Salt Lake City, Utah to Cheyenne, Wyoming.  It started out all about the ride for me. I didn’t do any fund raising because I had just completed the MS and didn’t want to ask my friends again.  However, during the ride I became very passionate about Fuller, the work that is being done to help those in need and the people involved.  When I was able to go to DC to welcome the team in last summer I knew that I was going to do something this year and I’m excited to be joining the west coast team in June.

Most people have trouble knowing where to begin their fundraising campaign. What is your advice to folks who love the idea of energizing their friends and family, but don’t feel confident or comfortable asking for donations?

I understand that and I started out that way too.  To be honest, I have learned that I don’t have to ask. No one likes to be pressured. I have found that what is important is to just tell people what I’m doing and find a way to send them the link.  So whether with friends, family, work people, church people, even strangers I talk about the adventure and the cause.  Most are interested so at the very least they are learning about Fuller…some give and some don’t, but you never know.  I recently went on a bike and barge trip to the Netherlands and three people I just met from that week have made donations. I start my fundraising by making a list of everyone I can think of who might donate.  I send them an email catching up with them about life in general and in that I tell them about my plans for the summer, including the Fuller link. I don’t write a lot, but I encourage them to go to my link if they are interested in knowing why I’m doing it. I think that encourages people to go to the link which is half the battle.  I think it’s very important to bring my donor team on the journey with me so I periodically send group emails (with bcc of everyone on my list) to update them on the progress of the fund raising, contests, my training, Fuller, etc.  I always include a thank you to those who have already given even though I have already sent out a personalized email thank you to each of them the same day (never more than 24 hours later) after I am notified of their donation. I believe you can never thank people enough.  Although I don’t ask for donations, every time I send out an update I get more donations which shows me that people who haven’t donated just need reminders.

Our returning riders find that fundraising in consecutive years can become harder, as they feel like they have exhausted their network. How do you continue to be so successful in your fundraising year after year?

To me the key is to build a team of donors.  In my ongoing communication with my donors I try to help them know they are part of something BIG.  My first email each year is a group email to those who donated the previous year.  I thank them once again and remind them how well we did the previous year, emphasizing that it wouldn’t have happened with every single one of them.  That starts things rolling.  This year that group email went out on March 10th and by the end of the month 60% of my donations had already come in.  Although I didn’t win any of the competitions during March Madness I utilized those contests to energize my donor team.  Another almost 25% of my donations have been received so far in May when I sent out information about the El Salvador work with pictures of my team’s three families.  I have found that different things motivate different people….. the cause, interest in the ride, desire to help with competitions, solely to support me, etc.   I had one friend make a sizable donation to the penny so my goal would be met. Of course when I thanked him I also explained that I would be raising my goal.  He loved that because he believes in the cause!  I did a fun thing this year and told my donors that anyone who donated a minimum of $250 would have their name on a sticker on my helmet and they would be riding with me.  I know that motivated some and there are currently 16 stickers.  Things like that make it fun both for me and the donors.