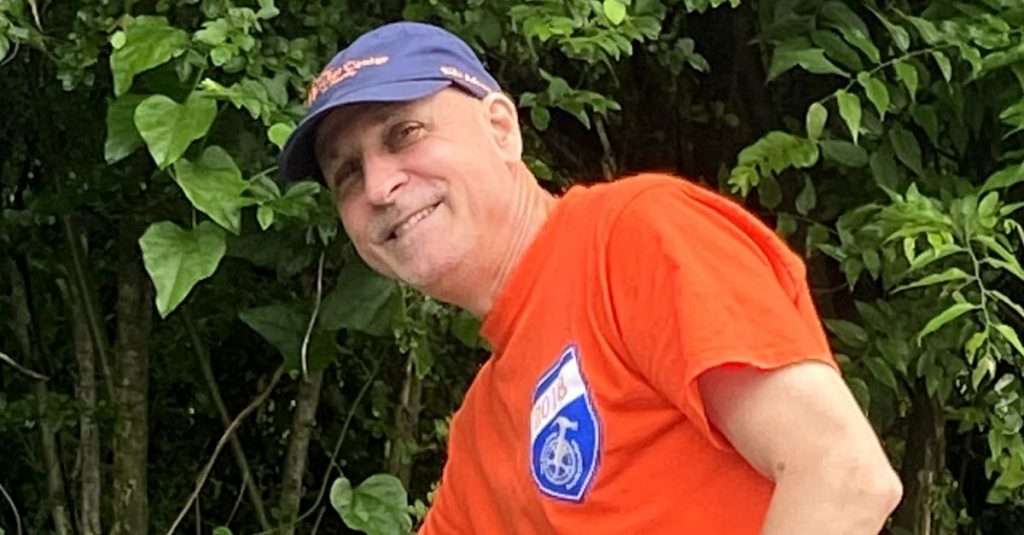 Today we picked up the Katy Trail again north of Hermann. Hermann is just south of the Missouri River. We had to cross the river to pick up the trail. Everyone stopped to see and photograph the pillars of fog over the river illuminated by the rising sun. It was a once in a lifetime magical moment for most of us.

Many riders took the Katy Trail all the way to Jefferson City where we crossed the Missouri River the second time in one day. Over two days, we cycled more than half of the Katy Trail. Missouri Highway 94 parallels the Katy Trail from Hermann to Jeff City. The road is mostly less than 100 feet from the bike trail. Some riders departed the trail and took route 94 to Jeff City for a smoother, faster transit. As we approached Jefferson City from north of the river, the dome atop the Missouri state capital was the tallest structure visible above the treetops. It was quite impressive. However, our route did not take us past it.

We crossed the Missouri River into Jefferson City on US 54. There was quite an impressive bicycle/ pedestrian ramp to get to the bike lane, which was outside of the two southbound lanes on the bridge. Our last rest stop was on the west side of Jeff City and it was only another 15 miles west to our California destination.

The first two SAG stops were on the Katy Trail at Portland and Tebbetts. The Portland stop was right on the river bank. A boat ramp down to the water made it possible to take a dip in the Mighty MO. I grew up in a Missouri River town, but today was the first time I ever stepped into that muddy water. I was surprised how warm it was!

The SAGs meet a lot of cyclists going both directions on the Katy Trail. Many wanted to hear about our build mission and bike adventure. We collected $70 in unsolicited donations! Having plenty of cold water on board, we filled up many more water bottles than just those of our riders

At the Trebbets stop, the most ugly dog I have ever seen come up to me and climbed into the FCBA van. But she was so sweet and just wanted attention and a tummy rub. I treated her to some cycling snacks after giving her the required petting.

Once in California, we arrived at out home for the night, the California United Methodist Church. We showered a few blocks a way at the public indoor pool and were treated to a great meal by the church. Tomorrow it’s onward to Warrensburg, Missouri for a Fuller Center Build day!

See our riders' progress, or donate towards their goal