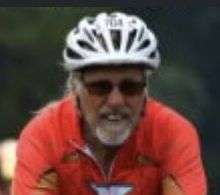 Waking up at Christ Episcopal. Church in Slidell, our day began after breakfast with a touching devotional in poetic form from Mark, whose message made Neil speechless for a moment, perhaps reflecting on his own life. We said goodbye to Diane, who was returning home also.

After circle and prayer we mounted up and headed out. Shortly out of town we reached Tammany bike trail and road 11 miles on this well maintained smooth surface through woods and bayous. Barely anyone was on the trail except for our team of riders.

A funny story but not for the victim was a much needed bathroom break at a museum on the route. An unsuspecting rider went in the men’s room along with his bike while the caretakers who were ready to leave after cleaning the bathroom locked the door with him in it. It could only be unlocked with a key. After other riders realized he was locked in they managed to get the attention of an employee in the closed museum who could unlock the door. Scary moment for the victim but he can tell this story for laughs now.

We didn’t experience much traffic until closer to the city of Hammond which was our destination. It was exciting to get closer and closer as this was the last ride on the first of 2 segments. As we approached our destination First Christian church of Hammond we saw the welcoming committee cheering and waving us in. They are so appreciative of us being there we were welcomed with popsicles and strawberries.

We all found our rooms and showered before having a meal prepared by the church staff. Orientation followed dinner and we were assigned to crews to work on several projects.

Lights out at 9:30 and up at 6 to start our first day of construction.

See Jeff's progress, or donate towards his goal