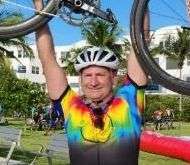 Today’s ride was an 84 mile ride which is the furthest ride so far on this adventure, and we went from Cross City to Crystal River, FL.

I was definitely not as well prepared for the weather as although it started out with 43°, it quickly dropped to 40° once we entered the Nature Coast State Trail which was a nicely paved ride through a wooded area.  For me, the major highlight of this trail was a wooden bridge that crossed over the Suwanee River.

After the first rest stop, the weather started warming up quite nicely, and I enjoyed riding past the horse and cattle farms. On two separate occasions, the cattle were running and appeared to be racing us as we continued along the route. I also saw a couple of long-horned cattle, but they were not interested in racing.
We continued going through the Goethe State Forest which appeared to be filled with pine, and cypress. I thought what an unusual name for a state park but then when I thought about it, I thought of the words “Go Thee” as in go thee into the world …. and that is what we are doing in part on this trip, and I am thankful to be here and am looking forward to more of this great adventure
See John's progress, or donate towards his goal