The 61 miles to Tougaloo College today made for a great finishing ride.  The roads were largely flat, the wind was fairly calm, and, most importantly, the rain stayed away.  The views as we swept around the lake for the last 10 miles or so were spectacular, and I think we all slowed just a little to savor those last few miles.

The last day on the road is done.  No more pedaling.  No more tire spray from the tire in front of you.  Just one last night of sleeping on the floor.  It may sound trite to say, but ending the ride is more than just a little bittersweet.  Although there’s no question we’re all looking forward to returning home to a long, hot shower and a good night’s sleep on a REAL mattress, I know we’re all also going to miss the rest of the group.  Our little rolling community. 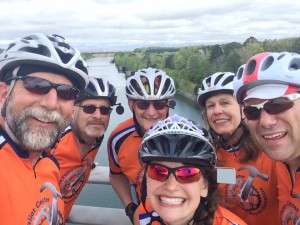 Community seems to be the word that best sums up this week. It’s very fitting that several of the pastors and lay people that hosted us along the way referenced communities even as they welcomed us into their communities: a Community of Believers.  My brother Ben spoke this morning for our devotional before we hit the road, and part of his message referenced community as well; that 40+ people who were largely strangers last Saturday, wrapped up the week as strong, unified community.  If you needed help, you only had to turn to the person next to you.  If you were tired on the road, someone would be there to help you along by cutting through the wind in front of you.  If you were cold, someone would hand you a jacket or blanket.  If you were hunting for a few square feet of floor space to sleep, someone would slide over and make room.  I don’t know that there’s a better example of community that when a group of individuals comes together to support and encourage one another in a shared undertaking. 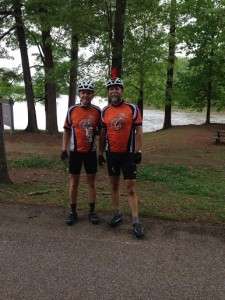 In addition to sharing the work of riding and the build day, our community also shared more than a few laughs… Devo’s, bike maintenance as a spectator sport, trying to identify and isolate the snorers.  A few new nicknames were bestowed (I will not reveal the reasons behind them): Shooter, The ‘Hoff, and Chainsaw.  Stories were exchanged, some funny, some personal.  In other words, we truly became a Community.