What does it mean to live a life of meaning and purpose? To me it means doing what you love, no matter what people say. I have found a non-profit organization whose mission is to end poverty housing, the Fuller Center for Housing. I started working with them last summer when I did the bike adventure for the first time, and I loved every single second of it. Not only was I able to bike and see our amazing country and all it has to offer, but I was also able to help work on homes for those in need.

On the workdays we did things like painting, spackling, landscaping, putting up fences, and even a little roof work. On theses days everyone came together as one team and we were able to get a lot of work done. The workdays are what make the trip so special because you get to talk with the homeowners and hear their story. Last year we were in Gary, Indiana and almost every house was boarded up. The main strip was all closed except for a few stores and there was graffiti everywhere you looked. We had a build day on Jackson Street, the street where Michael Jackson grew up. After about a half hour of work the woman next-door came outside and asked what we were doing. We explained the Fuller Center to her, including what we were doing there that particular day. Throughout the day we all had a chance to talk to her, and I wanted to hear her story so I went over and listened to her. She had lived in Gary for most of her life, and also raised her children there. Her daughter insisted that it was time to leave and go to a better neighborhood because nothing was going to change and that it was just going to continue getting worse. However, once she saw the work we were able to get done in just a few hours, her faith and hope was restored. She knew that something good was going to happen in the near future and the neighborhood would get new life.

What does this have to do with living a life of meaning and purpose you ask? My summers are spent helping those less fortunate. I don’t have to do this; I chose to do it because it is something that I love to do. Being able to help those that cant help themselves brings me such joy and happiness. I am able to give them a decent place to live, which will ultimately change their life. I’m leaving my mark on this country in more ways than words can describe and in more ways than one can imagine. To be able to lend a helping hand and make a difference in their life makes me feel like I have done something good in my lifetime. Help as many people as you can because you never know how far it will go. 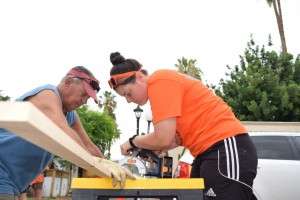