When we drove up to the house of the West family in Wilkensburg, PA with our porch post and gutters to “fix” their drainage problem, I saw right away that this home, that at one time would have been one of the more well to do homes in the neighborhood, had sadly drifted into disrepair. The Wests were older folk with grown children, but who had taken in and adopted three younger children ten years earlier. Mr. West was much older than Mrs. West and had severe arthritis so he could not do the much-needed work. The Pittsburgh Project, a local housing non-profit group, had begun to help the Wests with their house issues and we with the Fuller Center Bike Adventure had shown up on this day to help out wherever we could. There were three families with homes that needed immediate help, so we split up into groups and went out into the greater Pittsburgh area to find our families. 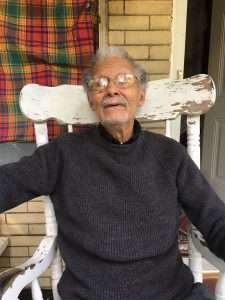 At the West home, my group assessed the situation and realized that we would need to alter our plan and tackle what we could. Mrs. West came out to meet us and directed her sons to help clean up the yard while we worked. She left to run some errands and while she was gone, Mr. West walked outside onto his porch and sat in a rocking chair. I saw him begin talking to one of our team members and it looked like he was trying to sing a few measures of a song and said something about liking Frank Sinatra. I understood later that he often stayed in bed due to his pain, so this was unusual for him to come outside.

He looked slightly older than his eighty-three years, but he seemed to be a lively conversationalist. Being a musician and a historian I walked over to join the conversation. Before I knew it, the other team member had stepped away to keep working and I was in deep conversation about musicians, jazz, race relations, and about his time spent in New York City as a jazz singer, early cable TV music show host, and his acquaintances with many celebrities that he knew. As he talked, he would mention singers, actors, or actresses some of whose names I had never heard. So I told him I would have to look them up.

While the team members ate our sack lunches, I looked up some of the people he mentioned and learned that there were some very good musicians that I could now enjoy. In the back of my mind, I was doubtful that everything he told me was fact, but I would smile and we would continue talking. As the day wore on, I realized that I was not doing much actual work on the West’s house, but the light in Mr. West’s eyes, to have someone listen to his stories and be excited about what he was saying, was the “work” I needed to be doing. He even let me record him singing a few bars of a song.

Toward the end of the working day, I cleaned the porch and deck where he was sitting and we kept the conversation going. As the team began packing up tools he said to me, “Wait here. I want to show you something.” I waited outside for a few minutes and when he came back, he had a folder filled with newspaper clippings and photographs of himself as a young man, full of life, with many of the celebrities he had mentioned in his stories throughout the day. He was so proud, and I was amazed and showed my excitement at every piece of memorabilia.

I won’t soon forget Mr. West. I thoroughly enjoyed my time talking with him. Sometimes the “work” we do to help each other doesn’t require tools.