A number of riders have faced some personal challenges this week.  One was felled by an intense headache.  Another fainted (not while riding the bike).  And another got word that his 100 year-old mother had passed away.  In each case, this community of bikers mobilized to help.  For most riders, the “non-cycling” aspects of the Fuller Center Bike Adventure are the most impactful, not only for the riders, but also for the support staff.

At our circle-up in advance of our 50 mile ride from Williams, AZ to the Grand Canyon, Beth Batchelor used her devotional to call attention to the community that has developed among us.  She referenced her own challenge (referenced in her blog post previously) and relayed the Bible story of the paralyzed man whose friends arranged to lower him through the roof of a house to receive healing from Jesus.  Focusing not on the man himself, but on the friends that went to the trouble of overcoming obstacles to get the man to Jesus, she compared them to the people on the ride doing similar things for each other. 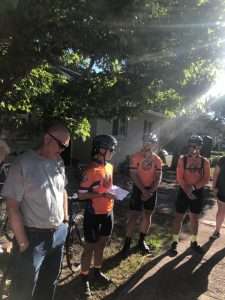 Beth Batchelor talks about the importance of community on the ride

Our arrival at the Grand Canyon was fortuitous.  This weekend is both the final weekend of the annual Star Party and the 100th anniversary of the Grand Canyon’s designation as a national park.  So, there’s a lot of activity.

A group of us visited the Star Party, which was extraordinary.  Local amateur astronomers set up their telescopes in the parking lot of the Visitors Center, trained them on various celestial targets and invited people to look.  Many also offered mini astronomy lectures to help viewers understand what they were seeing.  Jupiter rose early and it was pretty amazing to be able to see, not only the planet and its familiar bands of clouds, but also four of its moons. 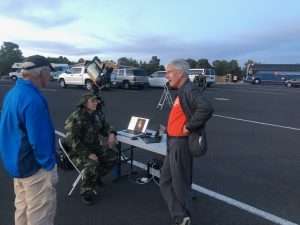 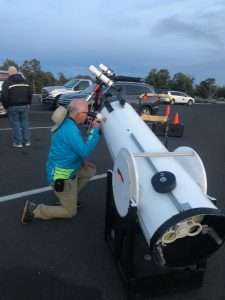