It is impossible to overstate the beauty and grandeur of Yosemite National Park.  Seeing it for the first time is an experience like no other.  As a first time visitor, my expectations were high.  Growing up on the east coast, I was certainly aware of Yosemite.  I knew it was beautiful.  But I really didn’t know what was there.  In fact, I merged Yosemite and Yellowstone in my head and wasn’t sure which one had Old Faithful.  I think I learned more about Yellowstone recently from the movie Free Solo, about the rock climber who climbed El Capitan without a rope, than I did in my while live previously.

Unsurprisingly, Yosemite is one of the most popular tourist destinations in the world.   Consequently, securing campsites for a group of 20 riders is an enormous challenges.  The U.S. Park Service makes campsites available first come, first serve on a monthly basis.  Yosemite campsites are sold out literally two seconds after they become available online.  Ride leader Connor Ciment miraculously secured two adjacent campsites deploying four Fuller Center staffer to request the sites literally the instant they became available.  Two were successful and the Fuller Center riders enjoyed a prime location for the two day visit to Yellowstone.

The bikers made the most of the short visit.  Some stayed in the valley and looked up. Bill, Ana, Scott and Ky are show here under Yosemite Falls. 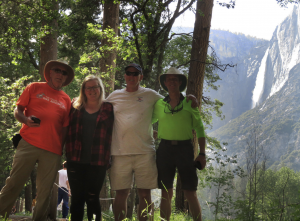 Connor lead a more adventurous group on a 4 mile hike up to Glacier Point, which is 7,600 feet at the top.  This hard band included Connor, Steve, Evan, CeLynn, Ed and Laverne.  They were well rewarded at the top with breathtaking views across the Sierras.  Somehow they found their way back to camp will after dark.

It was a long drive to Yosemite, made longer by the closure of the eastern entrance due to snow.  We had to drive around to come in through the west.   The Fuller Center van and trailer has never been so challenged.  As we entered the road leading over the mountain, we were confronted with multiple signs tracks and vehicles with trailers to turn back due to the steep grade on the road.  Unfortunately, we did not have the option of turning back and “The Beast” as the van is known made it through the Sonora Pass with Connor’s expert maintain driving.  Still, it was pretty hairy.

Unfortunately, the drive back over the mountain did not go as well.  As we headed up the mountain, drivers coming the other way began waving us back.  A significant hail storm had hit the mountain and driving was worse the normal.  Many cars were forced off the road.  We had to turn back.

We pulled into a pack hiking camp and waited the storm out.  After about four hours, we determined the pass was safe, sort of.  Rather than try to lug a full van and the trailing over the mountain together, Connor made two trips, one to get the van over and then he came pack to get us bikers.  As we drove over the top, we saw a number of abandoned vehicles stuck in the snow.   We returned to the church at 11:00 pm and Connor graciously allowed us an extra half hour of sleep in the morning for “lights on.”

They don’t call it an adventure for nothing.