On the Bike Adventure, I find that constant motion and planning easily fills my entire attention span. In my tunnel vision of ‘what do I need to do next’, I often find myself mixing today’s shower notes with tomorrow’s, and forgetting what town we slept in last night. The yesterdays and tomorrows run together, and it’s all I can do to just pedal. The day into Savannah gave me an opportunity to put down the day-to-day hustle, and breathe in perspective on this great Adventure.

The morning started out with a devotion shared by Bri, who has been on every summer ride that I have lead. I am not sure if she has given a devotion in our previous 15+ weeks together, but I will surely not forget this one. Bri was bravely vulnerable, challenging herself and the rest of the group to push through fears and anxieties that might otherwise cause us to miss out on all life has to offer. There were lots of hugs bearing love and support after the circle-up, a sight that reminded me just how incredible the Bike Adventure community is.

The ride was flat and 78 miles. It was Dave Perry and John Fender’s last day with the group. I had not ridden with either of them yet during the week as they were consistently well ahead of the pack. Being the final day of the week, I decided to push myself and stick with them. I made it to the first rest stop with them, but couldn’t keep up with their quick pit stop. As I munched on another fig bar, I waved them ciao. Having started fast and bid farewell to the riding buddies that got me there, I found myself with 58 miles of solo riding, valuable time for my introverted mind to reflect on and fully realize how exciting the evening was going to be.

I reflected on the year that I spent with Henry in Americus, and how his Bike Adventure Trip Leader journey was reaching its climax on Tybee Island. The Cross-Country ride was dipping their front wheels in the Atlantic Ocean after nine weeks of cycling together, and Henry’s hard work and dedication was being realized. I am incredibly proud of the work we did together throughout the year, and prouder yet of him bringing to fruition the amazing ride we hoped it would be. My spirits lifted as I imagined being a witness to some Cross-Country closing ceremonies later that evening.

Mile 76, mile 77, arrive at church. I unclip, and re-activate trip-leader mode. There is not much room for error in the afternoon’s schedule, and the support team does a great job of getting everyone situated at our new host, showered and shuttled to the 10 Year Celebration.

Once there, my to-do list is to set up the technology to facilitate a few multimedia presentations, and prepare for my two microphone responsibilities;  deliver a personal testimony about the Bike Adventure, and unveil 2018’s routes. Technology was predictably less than cooperative, and I found myself finishing the set-up just in time to get in the back of the line for food.

As David Snell began the evening’s program, I prayed quickly for God to put on my heart something genuine to share as my testimony. I have been behind a microphone unprepared before, and that usually results more words with less meaning. I prayed that I be able to impart a nugget of my Bike Adventure truth in a neat package. 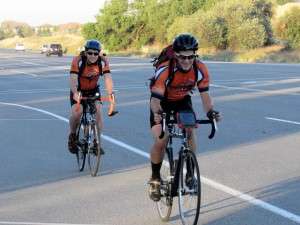 Ryan was next up to the microphone, sharing a thoughtful, humble and fun account of the Bike Adventure’s first 10 years. I have such an appreciation for Ryan, and I believe that the Bike Adventure’s success is rooted deeply in his passion and leadership. It was captivating to see the progression of the event through his eyes, and humbling as he recognized my role in it.

At the beginning of his speech, he talked about how he prayed during his senior year of college for two things: for God to show him a clear path in life, and the conviction to pursue it. His prayers were answered in multiple encounters with Millard Fuller, who would become his mentor. He transitioned from college to the Fuller Center through stepping out in faith, moving to Americus, and volunteering with the Fuller Center. This made me reflect on my own transition from college to the Fuller Center, and thus my prayer for a testimony was answered.

It was not much longer until I was called to the mic, and it was not long into speaking that I was pushing words through an engulfing layer of gratitude. I forced my words through a shaky voice, trying as I might to convey how life-changing the Bike Adventure has been for me.

In a manner too elaborate for a short testimony, the Bike Adventure threw a wrench onto the tracks I had laid out for myself, and turned me towards God. I did my best to convey that, and expressed my gratitude for all of the people that contributed to the about-face of my heart.

Next up was Henry, and he shared some of his favorite ‘quiet radicalisms’ of the Bike Adventure before gathering his crew up front for stickers. Giving stickers to your whole-way riders is always special, and incredibly so at the end of a coast-to-coast trek. I was elated to be a fly-on-the-wall as he made his way down the line.

The evening continued with more celebration of the Fuller Center, and news that the evening’s passing of the hat garnered over $25,000 in donations for the Bike Adventure! Raising the Bike Adventure’s two-millionth dollar has been a stretch-goal in the back of our minds the entire year. As registrations came in slower than in 2016, Henry, Jessica and I knew the feat would take special focus and effort. We worked tirelessly to envision new ways to reach potential donors, developing our corporate sponsorship recruiting to new heights and introducing more fundraising incentives for the riders we did have.

Despite tangible results coming of our hard work, the goal continued to feel more like a mirage than a destination. Thanks to some very generous donors joining the team, what seemed a dream will likely become a conquered milestone symbolizing the incredible impact the Bike Adventure has had on Fuller Center families all over the world.

I am thankful for everyone who has been a part of my Bike Adventure experience, and who has answered the call to live simply so that others can simply live.