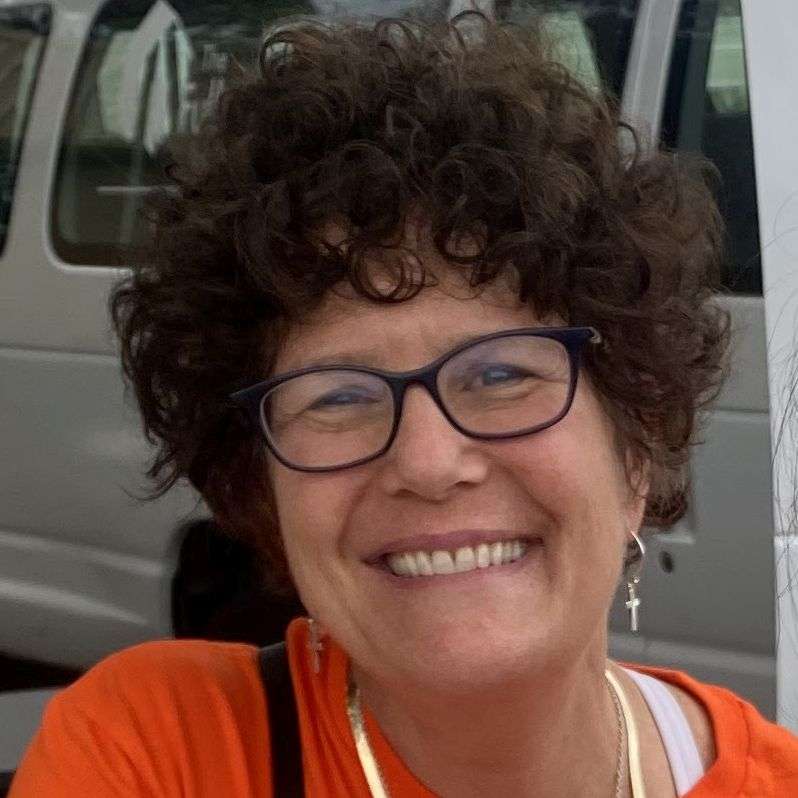 On Sunday, our build day, we had the privilege of attending the Methodist Community Church that had housed us so generously for three nights at the start of our bike trip. The pastor preached from Mark about John the Baptist.

He tells us how everybody was being baptized by John the Baptist, I’m sure people were lined up for days.  But when Jesus arrived. John told all of his followers that he’s not the One, but Jesus is the One who comes after me.  John could have been proud and developed an ego because he had many followers, but he humbled himself and became one with others, he became “second” so others could meet Jesus, the Lamb of God and follow Him.

Like John the Baptist, my new bike friends have become lesser. They have humbled themselves, served  and love others. 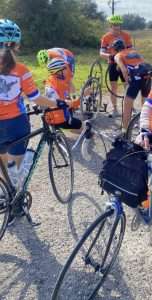 There were three flats on the first day.

Ahead of my partner, Alice and I, was a group of strong riders.  That’s putting it politely, I should probably call them the riders with a “competitive” spirit. Asking average speeds and stopping shortly at rest stops to get back on their bikes in the lead. But, at one point, out ahead of us we spot the orange Fuller Center bike shirts. Off to the side. Stopped. A group of about 6 or so.  The ones in the lead all halted for one… one who had a flat.  They all served their fierce competitor.  I was in awe.  Yes, competitive but not to the detriment of serving one of their own.

Embarrassed to admit I was using an e-bike because you see, I am one of those prideful people. I don’t want to show weakness but I knew, for me, I needed a burst at times on the long rides.  So, the first night, my chore group is talking about riding. Saying they weren’t that fast. Hadn’t rode as much as they wish they should have.  They were being humble about their abilities. Then I chime in, “I need to confess….I’m using an e-bike.”  You would have thought I said my dog died because they comforted me, said it didn’t make a difference, they were happy I was there and one even prayed for me that night that I let it go and have a good night’s sleep. Their humility put me at ease.  There was no shame to be had amongst them.

Another humble experience for me from this group are the sweepers.  They are a team of two who pull up the rear for any slower riders.  There’s  two people who volunteer for one ride during the week. They are to fall back. Ride slower. And take one for the team.

I had no idea this ‘sweeper’ job was a thing. I was thinking these riders are usually the ones out front, (you know, those competitive spirited riders I mentioned above).  Well, here they are again, full of humility.  No complaining. Not only stopping and encouraging anybody that needs it, but also rounding up any lost sheep, I mean bikers. Not leaving any behind. Not stopping until all are gathered together again.  Sound like a familiar story in the Bible, doesn’t it??

Also, like John the Baptist, once again, they became Second. They became less.  So others could be more.

Everywhere I turn, I see God’s love shining in each cyclist here. From helping a friend with a flat, searching for a lost cyclist until they were found, chalking up the road for others to not make a wrong turn, making a crockpot portion of oatmeal for riders one morning, even a note on my pillow top thanking me for the three nights together as roommates. The list goes on and on and on.  You sit with one cyclist and you will hear their story.  Many have had hardships, but the love that surrounds each story and rider is beautiful.

So, like the pastor’s sermon of John the Baptist, “I am less so He can become more”.  My friends became less so others can be more.  What a Blessing to be part of such a blessed group of people.

See Penny's progress, or donate towards her goal