I first joined the Fuller Center Bike Adventure in the summer of 2014. I had just finished my freshman year of college and my friend Michael and I wanted to do something different and crazy over the summer. We went back and forth trying to come up with ideas until I jokingly said “I’ve always wanted to bike across the country,” and somehow, the idea stuck.

We searched and searched until we found the perfect organization to assist us in our journey, the Fuller Center Bike Adventure. Not only were we able to see this beautiful country by bicycle, but also build and repair homes along the way for those living in poverty.

We showed up in Atlantic City, NJ with no idea of what we had just gotten ourselves into. We got our bikes that day and had no clue how to clip in or out, what gears shifted what, and the proper signals and safety precautions. Fellow riders were shocked that we had so little knowledge and were going the entire way.

When we signed up for the Bike Adventure it was motivated by selfish reasons, but after the first build day we quickly realized that it was much more than biking. On the 2014 ride we worked in Gary, Indiana clearing out garbage and overgrown brush. Midway through the day, one of the neighbors came outside and asked what we were doing. We proceeded to have a conversation about how her daughter had been encouraging her to leave Gary for years. However, she had persistently stayed, hoping that something good would happen, and that the Fuller Center was performing the acts of good hope that she had been waiting for.

This experience is when I came to understand the magnitude of the impact we were making. Over the years, each build day has secured a special spot in my heart and has fueled my passion for my major: Social Work. This adventure has changed and shaped my life in so many ways that I never could have imagined. The Bike Adventure has paved the path for me to lead a life of helping others in the best way I know how: giving a hand up and not a hand out. I have discovered what I what to do with the rest of my life and realized the type of impact I want to have on this world.

I cannot believe that it was a full two years ago that I first experienced the Fuller Center’s mission. I am so excited to begin my third cross-country trip with the Fuller Center. Here’s to a great summer with friends and strangers who will become family by the end of this amazing journey! 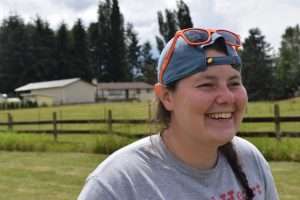