The benefits of working together in a paceline
June 18, 2022 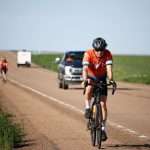 Friday this week was a challenging riding day. We had a  79 mile ride ahead with a steady 10-15 mph headwind. This would be a grueling day.

The headwind whistled through my helmet accentuating the fact that this was not going to be a normal day. My mind started to play games with me, telling me that every pedal stroke is harder than usual, and that I may not have the energy to reach our destination. Doubts took root.
Then one of the other cyclists, Gary from California who has much more experience than me, suggested four of us set up a paceline and invited Rolf from California, Wayne from Tennessee and me join in. That invitation completely changed my day, taught me a valuable riding skill, and reminded me of a larger life lesson as well.
A paceline is a formation of cyclists who agree to synchronize their riding so that all participants benefit. They ride in a line, with the front cyclist ‘pulling’ the second, third and forth cyclists tucked close behind in his/her draft. In a four cyclist paceline the combined draft saves the second cyclist about 27% energy, and the third and fourth cyclists about 35% each. Very significant over a long ride.
The cyclists rotate positions on a set schedule (we rotated every mile). The front cyclist drops to the rear and the other cyclists move up one position. This constant rotation prevents any cyclist from getting too tired, and together they rider faster (typically 2-4 mph), have greater endurance and expend less energy than they would have if they rode individually.
The four of us—Gary, Rolf, Wayne and I—reached Epworth United Methodist church in 5.6 hours.  We rode an average of 14 mph. So with the 10-15 mph headwind the relative wind speed was 24-29 mph. There is no way I could have ridden at 14 mph individually in those conditions. I would have had to stop more often, would have arrived much later and would have been exhausted.
And here’s the bonus. By riding together we cheered each other on, thanked each leader when he finished a ‘pull’ and had banter along the way to get our minds off the work. It’s not only more efficient but a lot more fun than riding alone.
So, what’s the broader life application of a paceline for me?
When faced with a challenge I will accomplish much more by working together than if I work by myself. Yes, it takes more time initially to get buy-in on the vision, recruit members and agree on rules of operation. But the net benefit in the end makes it all worth it.
This is a timeless truth. In the Old Testament of the Bible, the book of Ecclesiastes chapter 4 verse 9 says, “Two are better than one, because they have a good return for their labor.” (NIV)
So whether it’s business, school, faith organizations or family, I’m going to try to remember to take the time up front to enlist like-minded team members to work together. I’ll get better results and it will be a lot more enjoyable!
See this rider's progress, or donate towards their goal