I want to tell you a little, but real, story about the cycle of reciprocity. But, let me contextualize for you first.

The Coeur d’Alene bike trail has to be the most pristine of cycle routes anywhere in the world, and I’ve cycled comparable routes in Australia, Europe, and the U.S. Surrounded by unspoiled environment and undisturbed wildlife (We saw a moose, deer, snake, and crane while riding.), the Coeur d’Alene tarmac track is an asphalt conveyor belt, carrying you and your bike along lakesides, leas, and cottonwood trees with minor effort. I rode it (the downhill and flat section, due to being hamstrung by my uptight hamstring) for the second time yesterday, in company of Lewiston pastor, Jim McCracken, who I’d last spoken with two years ago. Cycling for fifty-four miles, we resumed our conversational thread as though minutes had passed since we last yakked (though we live on opposite sides of the world). But, cycling and spirituality builds brilliant friendships, as I see it.

Cycling in the Coeur d’Alene’s gasping loveliness, I never saw a scrap of litter, a ciggy butt, a discarded bottle, or any broken glass. I absolutely loved its purity and perfection. That brings me to the reciprocity business; today, we worked on repairing a home with the local Fuller Center chapter. The eventual owner will be a local man who’s almost fifty-nine. His backstory—and surely a contributor to his homelessness issues—is one of sustained, childhood paternal abuse of just about every kind imaginable. I’ll spare you the details. Despite this, the guy’s spirit hasn’t been broken, and he’s both affable and popular in the area. He’s an inventive and talented fabricator of tools and devices, too, as we discovered. As my team worked to salvage and repurpose timber and nails from his soon-to- be-home, I spoke with the Idahoan man in question, and guess what? His self-appointed “job” is to keep the Coeur d’Alene bike path clean, unobstructed, and in as good of condition as possible—he just believed he could be of service to tourists and locals if he volunteered that way.

More than this, his fabrication skills have helped him build a recovery trailer for his bicycle: He says he uses it to collect trail debris and rubbish, and he has a larger flatbed for rescuing injured cyclists, too; he estimates some 200-plus rescues in around seven years. Talk about reciprocity: unbeknown to us Fuller Center charity cyclists, we were helping repair a house that’s soon to be owned by the very man who volunteers to make it easy for cyclists to navigate this wondrously beautiful part of the world. Like I said, it’s a small but true tale about my humble involvement in the cycle of reciprocal giving. Oh, and my cycle buddy, Laurence, reliably informed me that one anagram of Pittsburgh is “tight burps.” So many reasons to smile. 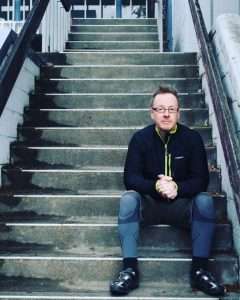