Reflecting on The Fuller Center and what it means to me, I immediately thought of The Rag Man, and the number of times I have been asked about the rags on my ankle. I signed up to ride with the Fuller Center for Affordable Housing for a very selfish reason: I wanted to ride my bike across America, and this was the cheapest was I could find to do that. My reason changed as soon as I realized what our purpose was, namely helping families in need, and the story of the Rag Man. The nine rags that have been tied to my ankle over the last five years represent and remind me of the hundreds of people I have personally witnessed who have shared their love for their fellow human beings in need. It is the focal point of my continued riding, when it is becoming harder to ride day after day, week after wee, this year for ten weeks. But there are still over 1 billion people in need of affordable housing in the world, and so I continue to do what I can.

So to recap, it was June 2011 when I first became aware of how The Rag Man story played out in my life. It started with the FCBA van stopping at my house on its way to the start of my first ride, Seattle, WA to Washington DC.

After breakfast at my house, eight of us climbed into the van, pulling the trailer, on our way to Boise and then Seattle. Michael Tiemeyer was driving and I noticed he was drinking from a St. Louis Cardinals cup, so I teased him about “keeping it safe” (me being a Cubs fan) or “it may end up out the window.” A while later after changing drivers I got a text message: a picture of the Cardinals cup on my bike stored in the back of the van. And, so, another Cubbies vs. Cardinals rivalry quickly started between Michael and me, all in good fun, of course.

Well, an accident on the expressway totaled the van and trailer that year, and four riders went to the emergency room. A lot of fast shuffling was done by a lot of loving hands to get the ride back on track and started on time. I was the only one hurt badly enough to leave the trip and go home (with a separated shoulder). Eight of us waited in a hotel lobby: me for my ride back home, and the other seven to get a ride on to Boise. My right arm now in a sling, with my Cubbies hat hidden, when Michael left the lobby I was able to sneak my Cubs hat into this duffle bag. Michael opened his bag that night to find a dreaded Cubs hat in his possession. And so for me, the story of the Rag Man started without my even knowing the story. As I was at home with my arm in a sling, riding a stationary bike trying to stay in shape and rejoin the ride, I learned Michael was wearing my Cubbies hat when he was not biking. I was being supported, encouraged, and loved by a guy I barely knew. And so after two weeks to stabilize my shoulder, one week to rehab, I was able to to rejoin the ride. And thanks to the support while I was gone, I showed up for the ride wearing the Cardinals hat.

For every ride I have been on, Ryan Iafigliola, the originator and yearly participant of FCBA, has read the Rag Man by Walter Wangerin. Following his reading we pass around a strip of cloth (a rag) and each person ties part of that rag onto the person next to us. This to me has become symbolic of the love and support I receive and give as I ride my bike across this fine country of outs, helping other people. It represents the love and support between the riders; between the riders and the church members who give us a safe place to sleep and provide great food; between the home owners and the riders; between the local Fuller Center affiliates that have prepared the worksite for us to help and includes, as well, all the strangers we talk to align the way, who support us and pray for us. 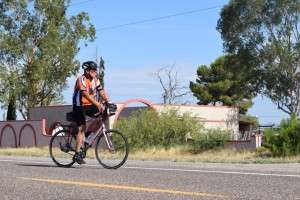