September 7, 2015: I had driven from Scottsbluff (my home) to Lincoln (where my son attends UNL) to celebrate his twenty-first birthday. Looking at a 400-mile drive home, I wanted to get a short, twenty-mile bike ride in before starting. It had been raining on and off, and the roads were wet. But, I had ridden in rain before. This day, however, the bike slipped off the edge of the asphalt on a bridge, and I went down hard. There was a hematoma the size of a cantaloupe on my left hip by the time the doctor looked at me in the emergency room. And, an MRI two days later showed two hairline fractures in my pelvis.

I was apprehensive about biking yesterday, July 14, as it was raining as we circled up for devotions. But, the morning started out okay. After the first rest stop, the rain had stopped. I was riding with Paul, and we were having a nice visit. Close to the second rest stop, I misjudged how close I was to Paul’s rear wheel, running into it and crashing. My left arm was cut. The PA at the clinic in Kearney put fifteen stitches in to close the wound.

Today, July 15, at our circle devotion, we got a weather warning report from Connor. The rain started almost immediately. I was uneasy and concerned about falling again, and it was a chilly day. I wanted to be in the front of the group; so, I was with three other riders, led by Henry. It was a brisk pace (for me!), but I was grateful for the company and the windbreak. We were the first of the riders to arrive at a convenience store in Shelton, Nebraska, just before a terrific storm started. The clerk there, Kelly, was extremely kind, making hot dogs and allowing so many wet bicyclists to crowd into her store.

After the worst of the storm passed, we set off again, with a word from Connor to get to Aurora before 1:00 p.m., when another storm would reach the area. I was still tense about the ride, spending all my time watching the road for cracks and debris.

The weather improved at about mile sixty-nine, when the rain stopped and it got warmer.  I stopped at a convenience store in Hampton, and found Gloria and Jackie waiting for me when I came out. They wanted to make sure I was not going to ride alone, and we finished the ride within sight of one another. And, I did not fall on the ride today!

The point of my blog is the thoughtfulness and friendships that are part of this biking group. I am a one-week rider, and almost everyone else has been on the ride since “Day 1” in Seattle. I have been made to feel welcome, and I have enjoyed hearing the stories of other people’s lives. This is an amazing group, and I feel blessed to have spent this week as part of The Fuller Center Bicycle Adventure. 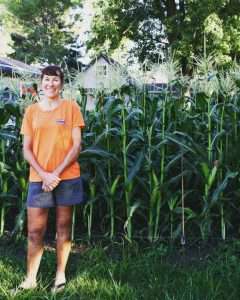