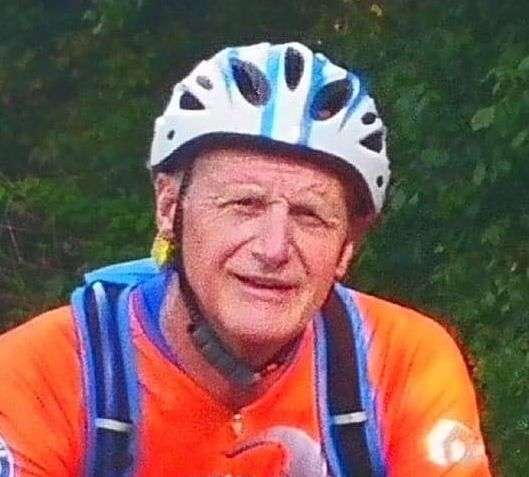 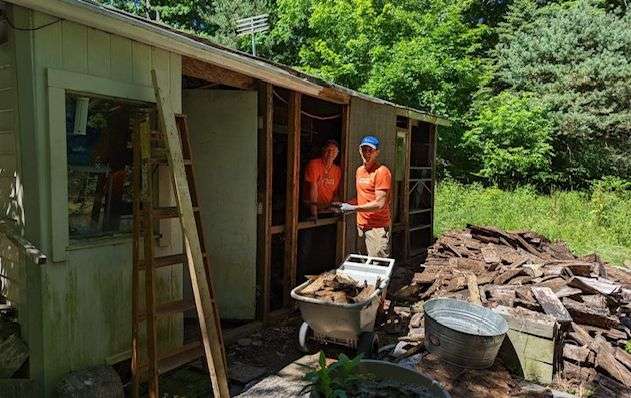 Today was a rewarding day as we set aside our bicycles for the privilege of working on people’s homes.

The week up to this point had been fairly demanding with over 320 miles covered in 5 consecutive days of cycling. However, we all knew that today would hardly be a day of rest but it certainly would be a day of reward, with the satisfaction that, as a team, we had made a difference in people’s lives.

There were a number of properties that the cycling team was asked to consider and the works ranged from painting a house, staining a front door, property repairs to yard-work. I opted to work on Tom’s house that needed wall repairs and a yard that required some major improvements and clearing. Initially we were a team of 4 up until lunch and,then the team increased as tasks on other properties were completed.

Our first task was to clear the stacked firewood timber from against the side walls as the siding was rotten and needed to be replaced. Ryan, Nick and I set up a chain to move all the good timber into stacks within the storage area and this then allowed Jeff the access he needed to replace the rotten sections of timber. In addition to this we cleared other stacks of timbers and all the vegetation from around the building, particularly any saplings, trees or bushes.

In clearing away the vegetation, we found a petrol-driven lawnmower that could speed the yard work and trim the overgrown grassed areas. After fetching some fuel and numerous attempts to try to start the mower, we eventually succeeded in the machine bursting into life. This allowed us to make a real difference in the front area and particularly the driveway by trimming back the long grass.

As we were finishing off our work for the day, we had made a real impact on this property and Tom joined us in some group photographs. His needs had been supplemented by the Fuller Center Bike adventurers but we had only made a start and more work will be needed in the future to improve the conditions around the Tom’s large yard area.

This is where the partnership with the local Fuller Center Teams really makes sure that those in the greatest need are prioritized as they are the eyes, hands, feet and hearts for the local community. Working for them as a group of cyclists, we make sure that the additional labor we provide makes the biggest impact in the short time we are there.

Speaking to Jeff, our supervisor, at the end of the day, he was very happy that everything on his list for that property on the day had been completed. A rewarding partnership for everyone!

See Tim's progress, or donate towards his goal