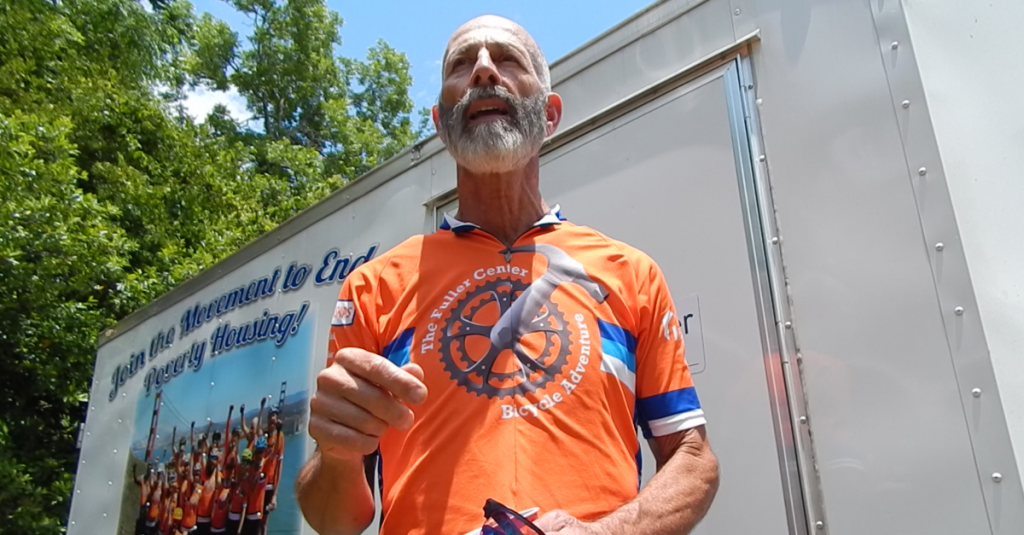 Today I’m going to catch you up on our 4th of July weekend and Monday riding adventures.

July 3rd (Saturday) Dave and I rode sweep. As sweeps, our role was to lag behind the other riders, assist others as needed along the way and help breakdown Rest Stop tables and supplies. Most of us have taken turns in the role.

Neil, whose administrative responsibilities as group leader include coordination with segment riders and their bikes, as well as numerous calls and emails decided to abandon riding plans today and ride sag rather than stop riding on the road to address calls, etc., which delays those riding sweep.

After the group’s departure from our first Rest Stop, we helped break down the Rest Stop and repair a flat.

Susan, who had ridden her e-bike to the first Rest Stop had temporarily switched support roles with Husband Jim, who now seems anxious to get back on his bike as Susan rides sag.

At the third Rest Stop, which happened to be at a Subway, Susan had negotiated free sandwiches and a cookie for each of the riders…she’s really quite skilled at this!

Knowing that Sunday is a rest day, some decided to go to a free concert at the Sioux Falls Park.

I tried SD cheese curds for the first time, realizing that my Wisconsin friend’s description of battered and deep fried cheese curds was something perhaps unique to Wisconsin.

July 4th rest day (Sunday). Jim has invited interested riders to join him at the Sioux Falls Park for a Parks and Rec’s 4th of July 5 k run. Five of us were up early, while others took advantage of sleeping in. To clarify, I joined as the videographer, not a runner. Following my total ankle replacement, preserving my appliance has become a priority and running is strongly discouraged.

Anna, who just graduated with a doctorate in Physical Therapy and played college basketball, once again showed the strength of her youth and fitness, though not without some wining about wanting to sleep in. I think she just fancied breakfast at a restaurant and she was willing to run for the opportunity. Randi, a college swimmer, now runner and always smiling, finished about a minute back. Karen, so joyful after Dx’d with MS and being wheelchair bound, is just so grateful she can bike and run. Jim, an educator and great support driver, speaker and coordinator finished just seconds later.

Everyone was by now so hungry and finding an open restaurant for breakfast was such a special treat.

I know you’re wondering about fireworks on the 4th of July, but given the inopportune circumstances of the heat wave crossing the country, we had to pass on those festivities. We were to be up by 0415 and out on the road by 0530 to try and “beat the heat!”

July 5th (Monday) starts with the usual flurry of assigned team responsibilities to get us out on the road. I note the heat even before the sun comes out and have to mentally prepare for the ride ahead.

We ride from Sioux Falls, SD (St Patrick’s Catholic Church) to Parkston, SD (Memorial Baptist Church). We’re pleased to have 3 segment riders (Bruce, Jeanne and Rick) joining us. After navigating the turns around town, the roads are pretty straight and mostly flat.

To my delight, once moving, it does feel cooler and less intimidating than when stopped.

Due to the remote nature of our route, 2 of the 3 Rest Stops are at cemeteries along the straight road. The first was the Norwegian Pioneer Cemetery and the second was fenced, but without a Title Name.

We’re all grateful when we pull into Memorial Baptist Church and meet pastor Boyle who has graciously allowed us to stay here tonight, as well as have dinner prepared.

Always feeling blessed along this adventure!

See Tony's progress, or donate towards his goal