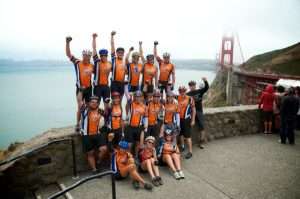 The FCBA 2017 cross-country route gets off to a truly golden start during Segment 1, as our group will pedal from San Francisco’s Pacific shores, across the Golden Gate, up and over the majestic Sierra Nevadas, and into the fabled gold and silver mining boomtowns of western Nevada.

Our adventure will begin with a ceremonious “dipping of the back wheel” in the Pacific Ocean, followed immediately by one of the most memorable miles in the U.S.A.: the expanse of the Golden Gate Bridge. We’ll try to keep our eyes on the road as we slip into the fog, leaving the San Fran skyline (and Alcatraz Island) in our rearview.

The first ride day is short but sweet, as we wind 38 miles through foothills and coastal towns to Novato. We enjoy an Off Day in Novato, which will provide a wealth of opportunities for riders to explore the Bay area by bike, ferry, Segway, etc., before heading north to Vacaville on Ride Day 2. The 59 mile ride to Vacaville (or “cow town,” for the Spanish speakers among us) will be a pleasant one, as the roads become increasingly rural, and apple, cherry, and prune orchards line the roadsides. This is, of course, the heart of wine country, but riders will have to enjoy the picturesque vineyards from afar as we trek through Sonoma and Napa Valley.

Urban riding conditions will return on Day 3, which is a flat 52 mile tour through Davis (the self-proclaimed “most bicycle friendly town in the world” and home to the US Bicycling Hall of Fame), and onward to Sacramento. Sacramento, which is the first of six state capitals that will be graced by our presence this summer, is the original home of the Pony Express, and also claims to process more almonds than any other locale in the world. On Ride Day 4, we’ll cruise along the American River on scenic bike trails to Folsom, where we’ll be within shouting distance of Folsom Prison. Hopefully we won’t get stuck there, and we’ll begin our ascent of the Sierra Nevadas and finish a 66 mile day into Pollock Pines.

Ride Day 5 will be a doozy: over 8,000 feet of elevation gain packed into 75 miles, including our first mountain pass of the summer. The striking, verdant beauty of the El Dorado National Forest will keep our spirits high as we climb…climb…climb on the Mormon Emigrant Trail to Carson Pass, elevation 8,574 feet. This is one of the highest and most historic mountain passes in the Sierra Nevadas. We’ll enjoy a 2,000 foot downhill ride into South Lake Tahoe, where we’ll set up camp for a much-deserved off day. Lake Tahoe is the largest alpine lake in North America, and is one of the purest lakes in the world (commercially distilled water is only .004% more pure.)

We’ll cross our first state line into Nevada (that’s “Nev-AD-a”, not “Nev-AH-da”!) early in the morning of Day 6, and climb over the last peaks of the Sierras, leaving the glistening Tahoe coastline in our wake. The mountains will be officially conquered by the time we descend into the historic mining region near Carson City, the capital of Nevada. The towns will quickly become smaller and further apart as we make our way east from Carson City on Highway 50: the “Loneliest Road in America.” Day 6 will conclude with a northerly turn to Fernley, which sits 30 miles east of Reno in the high desert.