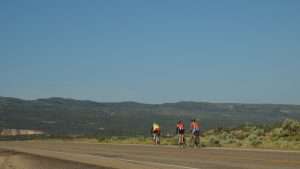 Following the historical routes of gold rushers and pioneers, Segment 2 winds eastward through the high desert and isolated mountain ranges of Nevada’s Great Basin, traverses the blindingly white flats of the Great Salt Lake Desert in eastern Utah, and finishes in greener pastures at the foot of the Great Salt Lake. This wild western route will be punctuated by a string of small towns along the I-80 corridor, where mining and gambling are still the primary economic activities.

Ride Day 1 brings us 63 miles northeast from Fernley, and includes a crossing of the “Humboldt Sink” — a massive, dry lake bed which was once one of the most dreaded sections of overland travel for those heading west on the California Trail. Unlike those 49ers of old, we’ll hydrate well and cruise into the charming town of Lovelock, which was once described by one pioneer as “the liveliest place that one could witness in a lifetime.” After 74 more miles through the arid Humboldt River valley, we reach Winnemucca on Day 2, which will be familiar to anyone who has heard the opening line of the timeless tune, “I’ve Been Everywhere (Man).”

Nevada is indeed the most mountainous state in the Lower 48, with 172 summits over 2,000 of prominence, and our roller coaster ride will ramp up on Ride Day 3 with an epic 102 mile ramble to the tiny village of Carlin. En route to Carlin, we’ll scale our first climbs since the Sierras: Golconda Summit (elevation 5,189 feet) and Emigrant Pass (elevation 6,125 feet). After our first century ride of the summer, mileage levels will return to normal on Day 4.  Day 4 highlights include views of bustling downtown Elko, the largest city for hundreds of miles around. The hills surrounding Elko produce more gold than most countries do, and we’ll get intimately acquainted with several of these hills (and our small ring) on Ride Day 4, as we steadily gain elevation on a 73 mile push to Wells — a veritable oasis in the desert.

After conquering Pequop Summit – 6,967 feet – on Day 5, the landscape will really flatten out as we coast toward the Great Salt Lake Desert and the quirky town of Wendover, which peeks back at Nevada from just over the Utah line. Sunglasses will be in order on the sixth day of Segment 2, which brings us through the brilliant, pearly white salt deposits of evaporated Lake Bonneville. Towns and gas stations will almost cease to exist for this stretch, and we will definitely have earned our *salt* (…) by the time we reach the relative lushness of Grantsville and the Great Salt Lake. The towering Wasatch Mountains will finally come into focus on Day 7, as we finish Segment 2 off with a brief commute into Salt Lake City. “SLC” is the 3rd state capital we will visit, and is the largest metropolis we’ll encounter between Sacramento and Amarillo. After seven straight ride days, Bike Adventurers will no doubt be relieved to have an off day to explore the City’s spectacular sights.