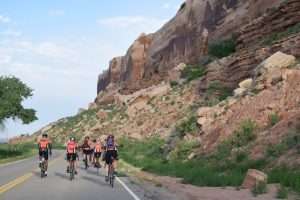 The first pedal strokes of Segment 3 bring us out of the Great Salt Lake valley and up/over the epic Wasatch Mountains, as we cover the short distance from Salt Lake City to Heber City. Salt Lake City served as the host of the 2002 Winter Olympics, and we’ll catch passing views of massive ski jumps and winding trails near Park City as we summit the rugged Wasatch Range at the curiously named “Little Mountain Summit” (7,032 feet). It’s all downhill from there, as we drop way down – past the clear blue waters of the Jordanelle Reservoir and into Heber City, which is surrounded on all sides by towering mountain ranges.

Ride Day 2 is one of the most topographically diverse days of the whole summer, and will be the second Century Ride in the first 3 weeks. It begins with a serious climb up and over Daniel’s Pass (7,995 feet), and then follows along the green banks of the Strawberry Reservoir. Eventually the route plunges down to the Uintah Basin and its characteristically Western scenes of railroads, abandoned mining outposts, and high desert flora.

The ride enters its fourth state on Day 3, crossing the border into Colorado towards the very end of the 64 mile day. Everything around here tells you that you’ve entered Dinosaur Country: home to the Dinosaur National Monument and its many fossils, and to plenty of dino-themed roadside stores and restaurants along Route 40. Our destination, the small town of Dinosaur, CO, pays homage to this Jurassic heritage by naming its streets after its famous locals (ex: Antdromedus Alley, Brachtosaurus, Bypass).

The final ride day of Segment 3 is an up-and-down cruise through the rolling prairies and dry grasslands of western Colorado. We will gain several thousand feet of elevation across 91 miles…all while staying in the same county! The snakelike Yampa River will lead us into Craig, which will be the site of our first Build Day. After working hard with the local Fuller Center to live out our mission, we’ll have an off day to enjoy the legendary hospitality of the people of Craig.