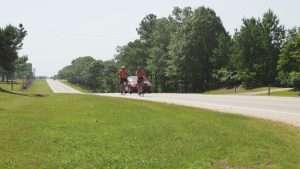 Segment 6 is a trek from the Great Plains into the Southeast, and the landscape will get progressively greener, lusher and lower the further east we travel. The rural scenes of Oklahoma, Arkansas and northern Louisiana have an appeal which is very different from the striking beauty of the West; here, we will enjoy small-town hospitality, gently rolling hills and peaceful country roads.

Day 1 brings us 78 miles from Lawton to Paul’s Valley, out of the grasslands, past bobbing oil drills and into fields of high cotton and wheat. Paul’s Valley is a historic city, and contains more brick streets than any other city in the U.S. (which is how we know that it was not a town built by cycling enthusiasts). Day 2 steps up the mileage, with an 82 mile push to the small town of Atoka. This route will pass by Lake Arbuckle and straight through the ancient Arbuckle Mountains, which are the oldest known formations in the U.S. between the Rockies and the Appalachians. Back in the day, the Arbuckles were as high as the Himalayas! Thankfully for our quads, erosion has worn them down to around 600 feet, and much of the land is now used to raise cattle.

Day 3 gets within shouting distance of a century ride, as we cover 96 miles from Atoka to Idabel. We spend our final full ride day in Oklahoma cruising through the forests and foothills along the southern perimeter of the Ouachita Mountains. We spend most of Ride Day 4 in a geographic identity crisis: Arkansas welcomes us about halfway into this 73 mile ride…then it’s back into Texas for a mile…then back into Arkansas. We end up in a place called Texarkana, which has the Texas-Arkansas state line running straight through the heart of downtown. This is sort of TEXas, sort of ARKansas, sort of LouisiANA; the Twilight Zone of the Southeast.

We do get definitively into Louisiana, our ninth state, on the final ride day of the segment. This region – northern Louisiana – is known affectionately as a “Sportsman’s Paradise,” due to its rolling hills, dense forests, varied wildlife and mighty rivers. The fine city of Shreveport is our final destination in Segment 6, and it’s a colorful place known for its diverse heritage, blues/jazz tradition, and riverboat gambling. The run of southeastern Build Days commences in Shreveport, which is where the first-ever Fuller Center houses were built back in 2005!