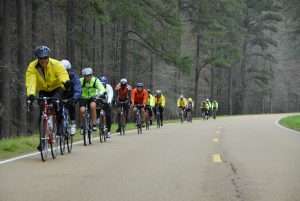 Segment 7 rolls through the iconic riverbeds, deltas, cotton and cane fields, and piney forests of the Deep South. The route includes crossings of the Red River and the mighty Mississippi River, and is by the far the flattest segment of the trip. You could just about roll a nickel from Shreveport to Jackson, so rolling a bike through should be a breeze!

The first day of the segment is an unprecedented hybrid: a brief 32 mile push from Shreveport to Minden, followed by a build in Minden during the afternoon. Day 2 is a more conventional 72-mile ride to Natchitoches (say that 10x fast…), which will offer panoramic views of the cotton fields, sugar plantations and muddy swamps that populate the Red River valley. Natchitoches was founded by the French way back in 1714, and has a very rich history as the oldest permanent settlement within the old Louisiana Purchase. We’ll stop and have our second build of the week in Natchitoches, then trek 69 miles to the small city of Jena on the following day.

The route from Jena to Natchez will be 54 of the flattest miles you’ve ever seen on a bicycle, with grades staying near zero almost all day. This stretch will roll along the various bayous and tributaries of the Mississippi, and finally cross that “Big Muddy River” at the end of the day heading into Natchez. This crossing represents our 10th state line (Welcome to Mississippi), and is also the point where radio stations will switch over from K’s to W’s…a definite sign that we’re making progress toward the East Coast! Natchez – once the capital of Mississippi – is a beautiful and historic old river town, and is known as the “Antebellum Capital of the World” due its many sprawling plantation homes.

The final ride day of Segment 7 is a doozy: a 101 mile ride over gently rolling hills and across open farmland to Jackson. The entirety of this route, which is our last century ride of the summer, follows the Natchez Trace, a historic trail maintained by the National Park Service. The Trace extends all the way to Nashville, and has been used for centuries by Native Americans, Europeans and Americans as a trade route linking the Mississippi to the interior. Today, the Trace is a limited-access highway that prohibits commercial traffic, and has speed limits of 40-50 mph…a cyclist’s dream! We conclude the segment with an off-day in bustling Jackson, which is Mississippi’s capital and largest city.