As we get to the end of another FCBA summer, and think of returning home to our normal lives, I’ve been reflecting on those things which make the Bike Adventure such a unique and special experience.

END_OF_DOCUMENT_TOKEN_TO_BE_REPLACED

By Peter Asmuth
In 1847, a group of ill-prepared pioneers were trapped by snowfall and had to spend the winter snowbound in the Sierras. Barely half of the 87 members survived the ordeal and some resorted to cannibalism. The FCBA foray to Yosemite had an eerie similarity, although no one was eaten.
The campers set out in two cars and a 12 passenger van, towing a large trailer, which carried their tents and sleeping bags. The nearest pass was closed due to snow, so the intrepid cyclists took a 4 hour detour through the Sonora Pass and made it to Yosemite by early afternoon. The Sonora Pass is extremely steep, with switchbacks, no guardrails and challenges in the best of conditions. They made it to the park by early afternoon and had a great time enjoying the natural beauty that Yosemite is famous for, along with the many, many other summer visitors.
The next day they all headed back to the church, where I stayed, in Bridgeport. The cars had no trouble, but the trailer-towing-van got a later start and headed up the pass after the weather took a turn for the worse. Soon they were seeing cars coming down the mountain covered in snow and concerned drivers waving at them to turn back, before it was too late.
They pulled into an outfitter’s ranch and waited out the storm while they ate dinner and discussed camping there for the night. By this time they had been on the road for 7 hours.
Eventually, the storm passed and they cleared the snow and opened the pass to traffic. Our Great Leader, Connor and another brave soul, Dan, took the trailer over the mountain and then returned to pick up the campers. I wasn’t there, so it would be unfair for me to describe the crossing, but the next time you’re on a steep road, take note of the grade and then try to imagine a 26% grade, no guardrail, on a dark, winding road. Some stuff.
Pic: I’ve been accused of exaggerating, before. 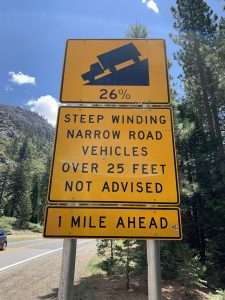 They got to the church at 10:30 pm, said their prayers and went straight to bed, grateful for their delivery.
The next morning we packed up and left the Sierras in our rearview mirror and headed into the high desert of Nevada.